I just spent less than 24 hours in Beirut about a month ago… the first time I visit Lebanon. I do hope that I will be able to visit again as soon as possible. The short time I spent there allowed me to fall in love with the country. This is the vision that greeted me at dawn from my hotel room balcony.

I hope you pull out of this Lebanon. I’m sure you will.

I think Israel proved its superiority now. In 6 days it’s destroyed almost all the important infrastructure of the country and most if not all tourists have left or are leaving the country. Their economy is destroyed and there is no Hariri to resurrect it.

The point is made.

Continuing the disproportionate use of force now is much more damaging to the aggressor, much more than anyone else.

In celebration of me going off to Beirut for the first time ever, what better chance is there to put the blame of all the world and everyone’s personal life on a Bahraini living in Lebanon at the moment?

So without further ado, let me introduce the Mahmood’s Den Scapegoat of the Moment….

So have at him people! He’s the reason that the world is so screwed up! But please allow me to be the first first to level blame on him….

MoClipper is the reason that my passion flower tree decided for the first time since it was planted a year ago to put up the most gorgeous bud and it is promising to open – the very first passion flower – in the next couple of days! The plant that I have nursed and poured much love on is about to have its babies and I’m not around! And all because of that bloody Clipper!

I know I’ll have access to the internet so I might pop in from time to time, so if you’re in Beirut and want to hang out, leave me a comment here or fill in the contact form… I’m leaving back to Bahrain on Saturday afternoon.

I’d like to thank both Anisa and Lujayn for a wonderful evening in Dubai, the best I’ve had here for a very long time. Excellent company, stimulating conversation, good food, and new good friends.

I am privileged to know you ladies. I hope that we will make these meetings a regular on my visits here. 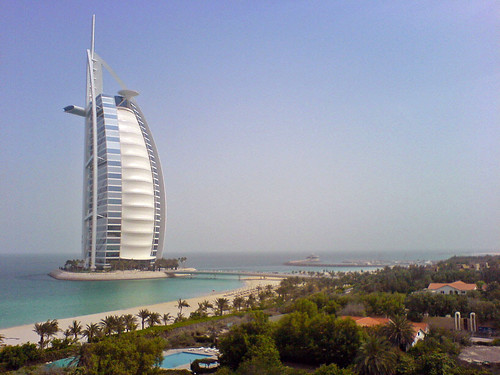 Everything done, the bag is packed, finished breakfast and now just chillin’ in the room till check-out time in a couple of hours and then onwards this evening back home…

It’s been some time since we had fun with a scapegoat, I haven’t travelled much lately, but today – and in a middle of a sandstorm! (keep you fingers crossed) – I’m off to Dubai for a couple of days to participate in the Dubai Press Club’s Arab Media Forum.

So, in the tradition of the Den, I must announce an MtvSM, who this time is….

The rules are really simple, blame Tawfiq for everything, and as he is a member of the steering committee of the largest Bahraini political party, Al-Wefaq, he should especially be blamed for the almost sure thing of Jassim Al-Saidi not only most probably being re-elected, but probably going to be the new chairman of the parliament! (full disclosure, not my idea and I heard it mentioned by a friend after which I felt bitch-slapped by him!)

I’m taking my laptop with me in the hope that I will blog this conference, so you might see some posts from me in that regard.

See you in a couple of days, and have fun!

I thought he avoids the UK like the plague… I just hope that this visit doesn’t turn this country upside down.

The last couple of days in Amsterdam. It rained, and then the cold, cough and VERY sore throat caught up with me, so much so that I was off sick for a week after a came back and I still suffer from it. Even after two visits to docs and a couple of shots and a bucketful of medicines. Never mind, I’m alive.

The quality of these clips should be familiar to you now.. all through my Nokia 6630 phonecam… the picture is ok, the sound is crap. Ok ok, both are crap…

I saw a fantastic Samsung flash-memory based camera in Dubai the day before yesterday and fell in love with it. Very thin and slightly better quality pictures than the phonecam, but not so much better for me to flash my card and buy it. That’s coming soon I think as I do need some handy, little, light camcorder to continue vlogging (yes the bug is deeply ingrained now.)

I also saw some really nice Sony HDV camcorders at the Gitex exhibition in Dubai a couple of days ago, one in particular shows a lot of promise, a cheapo HDV model: the HDR-HC1 and it was listed at 7,000 Dirhams ($1,866). The picture quality was definitely better than any DV camcorder I’ve seen (single CCD ones) but the pictures were washed out, with a lot of colour smearing especially at ambient indoor light.

Sony were running a side-by-side comparison footage shot using the HDR-HC1 and a normal DV camcorder, the exercise shows quite clearly that the quality of the HDV produced by the HDR-HC1 is much better. However, when compared with the HDR-FX1 “proper” consumer HDV, it pales in comparison. The reason I think is not only because of the optics, but also the CCD blocks, the HDR-HC1 uses a single CMOS chip for image acquisition, which is a new technology as far as I can gather, rather than the 3 individual CCDs as in the case of the FX1. The technology shows a lot of promise.. but I would hold off and pay the approximately $1,000 difference and get the FX1 instead if I was looking for image quality.

BUT (yes, there is always a but somewhere) judging by my experience with the Canon EOS 20D, it is a large camera, not easily portable, and is not really a “point-and-shoot” type. It totally discourages you from simple “lomography” if you like when compared with the IXUS for instance. Throw that in your pocket and shoot anything that moves. In fact, that is one of the main reasons that I shoot with my phonecam rather than bring out my Sony PC9E DV camcorder. Convenience. The Sony PC9E is bulky and unwieldy compared to a mobile phone of course, in addition to it being a bit threatening. However, the picture quality is infinitely better.

But I’m getting to be lazy. I want small and fast. That’s why I’ve been looking more and more into the new mobile telephones with particular emphasis on their image acquisition engines! Top of the heap at the moment seem to belong to the Sony Ericsson W800i. The newer Nokia N90 is a total disappointment. Although the camera is just as good as the Ericsson model, the design is total and utter crap. Whoever designed the N90 should be shot, because I think he’s done a lot more damage to Nokia than any competitor could. It’s big, bulky and total and utter crap.

Anyway, I guess I have to make some sort of decision regarding camcorders. I would really love to just get a small and cheerful camcorder for instant shooting, even if it records on memory sticks (though that would be restrictive in the length of the movies it can store) or even better a smaller format than DV. Didn’t Sony bring out those MPEG4 camcorders a couple of years ago? Whatever happened to them?

I’d like to hear from you if you have or indeed use such a small camcorder and let me know your experiences with it. I’m looking to buy something immediately, but need to hear some opinions first…

The first very tiring day at the exhibition is over, and it’s time to relax, unwind, have some dinner with a friend and enjoy what Amsterdam has to offer at nights…

again, this is shot with my mobile phone camera, so don’t expect Oscar quality, but it’s good enough I guess… enjoy!

The flight was one of the worst I’ve been on for quite a while, not to blame KLM of course, but the travel agent screwed it up: they told us that it was a direct flight (meaning only 6 hours in a flying tube) while in actual fact we discovered that it was routed South via Abu Dhabi, which adds another 3 hours onto the flight time!

Now add to that I have chosen the very first seat in economy, you know, the seats with fixed arm rests? Yep, those ones, so no way I could get comfortable and sleep.

Anyway, the compensation is that I was going to Amsterdam, one of my favourite cities in the world… the rest is in the movie, which covers the flight and arrival in the city. I’ll be editing the remainder of the trip over the next few days… Shisha is seriour business it seems, although I DETEST the stuff even when I used to smoke, in Jeddah they now have really swanky menus for the muck.

Last time I was in Jeddah and had shisha with friends at the corniche, I was sick afterwards for a week!

Nevertheless, let me introduce you to Dreadfully Unserious, a delicious photographer of mundane life in Jeddah, Kingdom of Saudi Arabia. She makes you want to visit, regardless of what you view Saudi Arabia as.

Hat tip to The Drama of Living for uncovering this gem!