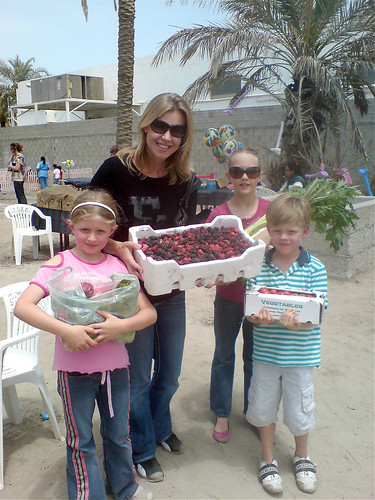 The Vaandragers at the Farmers Market, originally uploaded by malyousif.

A lot of people came out and enjoyed the first Farmers Market this morning on the Budaiya Highway and bought some fresh local produce and enjoyed the other handicrafts and local food stalls.

I was fortunate enough to buy a couple of plants from Anne Al-Jalahma who recently opened a new nursery by the Barbar Temple. I got a Mexican Flame Vine (Senecio Confusus) which I planted in a pot and a Dombeya Elegans which was just right to fill in a gap behind a small pond in the garden. As all of Anne’s displays had a proper label with a picture and the Latin names of the plants, I also found out the name of a plant I’m propagating by cuttings I got from Al-Khair garden centre who didn’t want to sell it (I did get their permission to snip off a shoot!) – that plant is Clitoria Ternatea with quite an interesting looking flower. I hope it survives. Otherwise I’ll just have to visit Anne’s nursery and get one from there. She tells me that she even has the “double” variety.

Despite the heat, the atmosphere at the market was quite nice actually; children were running about, a few stalls had buyers around them getting the best and freshest produce at very reasonable prices. More stalls would have certainly been welcome; though. I’m told that a lot of those who confirmed their participation even yesterday just didn’t turn up, even though some of their stalls were provided free, sponsored and paid for on their behalf.

The kids enjoyed an entertainment stall provided face-painting and balloons. Unfortunately; however, a reserved jumping castle didn’t arrive by the time that I left, again not due to organiser’s failure, but the supplier not keeping their word.

The organisers were accosted by a big business offering to help them take the event to the “next level” and made much bigger. That’s quite nice, but if the organisers do take that offer up, the possible quaintness of the event might well suffer. I think they are well on the way of possibly building a very nice “local” brand which might be diluted – if not completely eradicated – by accepting such invitation.

Another thing that the organisers could consider is doing this event in an air conditioned hall, it was just too hot even for the produce. Places like the Marina Club or Awali Club or the like would be ideal locations; failing that, a Farmers Market happening in the cooler months, say between November to March on a weekly basis (which the organisers are seriously considering anyway) would be much appreciated by all.

I hope that whoever spent some time there enjoyed it. I know I have.