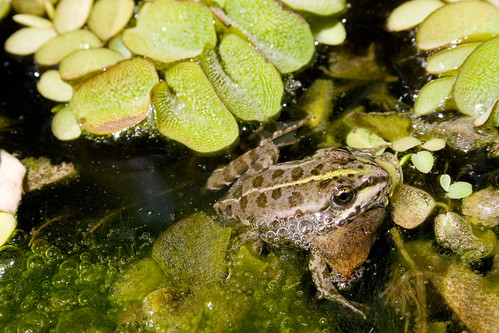 This is one of two frogs of the five tadpoles my daughter Amna commandeered from a garden centre a few weeks ago. It has become (I think) an adult as it lost its tail and is hopping about above the pond plants and doing well.

I am really glad that at least one more survived and developed to keep this guy company, maybe they’ll make more babies and we’ll have a real wildlife zoo in our garden before too long! 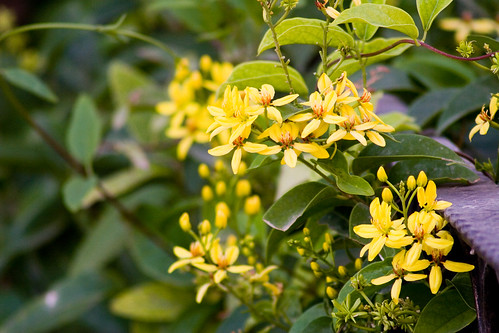 Good morning! It’s Friday again and this is my gift to you this morning my friends.

I hope that your weekend will be a joy spent with your loved ones doing whatever brings you happiness and satisfaction.

Filbert has been calling for his parents, especially as he sometimes hears them outside and sees them sometimes in the poinciana or the palm tree just outside the window.

Frances and I were heartbroken, so we decided to try something this morning and that is to take him out to the garden and see what happens, under our watchful eyes.

I took him out and placed him on the grass by the poinciana and stepped back 25 feet or so to see what would happen, but close enough to step in and rescue him if need be.

The mother didn’t take very long to come down and greet Filbert; she immediately started to feed him! The poor thing was hungry it seems and the amount of food he has eaten is maybe not enough for him, I though he was weaned but I could be mistaken.

The father came down soon thereafter but started to jostle the mother and push her away. We were a bit afraid as he was a tad bit aggressive, but the mother seem to have handled the situation, that string is quite strong.

They fly away and come back and the process continues for a while and the mother keeps feeding him, she flies away and he complains and squawks.

In between these sessions he had the full garden to walk about; unfortunately the mynah birds noticed and one swooped for the attack! Fortunately both Frances and I were close enough to shoo it off, but that didn’t stop them as the other of the pair swooped down too and we put a stop to that too.

Frances and I took different positions to protect Filbert a bit better.

The parents continued to come down and look after Filbert for a little while longer until he walked into a nook in the garden to settle and preen. He had had enough with food it seems. The parents flew away and went into the nest to look after their other chicks.

I picked him up and took him back in. Frances and I decided that the syringe should come out and we should give him some of the special chick mix and use that as the main feed and supplement him with grapes, nuts and seeds as required.

He was a lot calmer after that feeding and he settled on his perch to sleep off the morning’s exertions.

Although the parents did not reject him, it was pretty obvious that there is no way for him to be taken back to the nest; and as the father was a bit aggressive, we don’t want to risk him being hurt if somehow we do manage to put him back into his original nest.

So he’ll stay with us for a while longer I think. 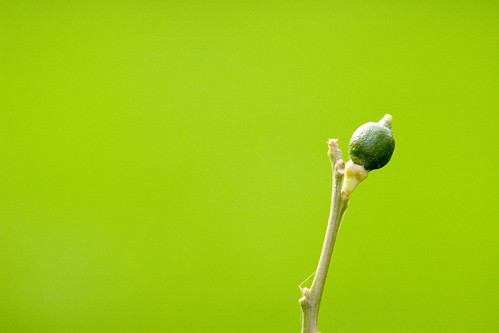 This is the first ever lemon that is starting to form on one of my lemon trees.

Fantastic for backgrounds, if you want it in higher resolution let me know! 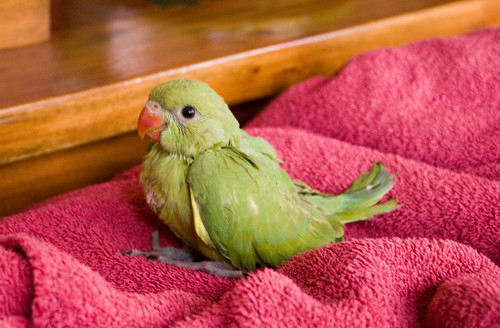 I saw a commotion through my study window and stood up to investigate. It was two mynah birds attacking something and two parakeets attacking the mynahs and in the middle of this mÃªlÃ©e was a little parakeet which was obviously the centre of attention!

The mynahs were intent on killing it, the way they swooped and pecked at its poor head. The parents were almost helpless, but even if they did get rid of the mynahs, how are they going to take this little guy back to his nest which is in the eaves?

It is now adopted by the Al-Yousif household. In addition to two dogs, a multitude of fish, 5 tadpoles, now we have a young parakeet!

This is day one with Filbert, I am sure you will see a lot more pictures in the coming weeks and months. 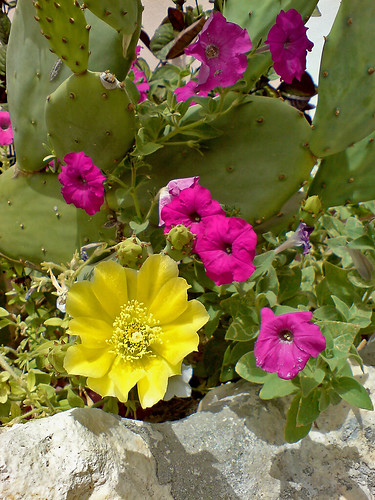 The last time this cactus flowered was almost exactly a year ago! It’s a lot bigger now obviously, but is just as pretty, if not more.

It flowered only today. However, as there are a bunch of buds on this and it’s another cactus like it in the opposite bed, the scenery will look rather nice when both flower.

You can see that my seed-grown petunias are trying to take over here, as they have done in other beds!

Man it’s getting rather hot. The downpour last night was something to experience this late in April too, I can’t remember if it rained this late in the year for a very long time. I do remember last year they did have rain during the F1, but last year it was done in March, maybe the Bahraini rain follows the F1 event!

Good luck to everyone organising, participating and experiencing the F1 in Bahrain. If you’re a visitor in this great country, you’re very welcome.

Just like every Friday it seems, and the 13th is no exception, I got the itch to go and buy some plants! True to form, I went with Frances in her brand new spanking car to Jannusan Exotics – my new favourite garden centre – and bought three Java Glory Vines (Clerodendrum x speciosum) and two Mexican Flame Vines (Senecio confusus)

I was not particularly happy with the jasmines I planted a few weeks ago in the “New Border”, they didn’t grow much and I’m impatient; so I yanked those out an distributed them to two palm trees which I hope they will climb up in a much more successful manner, and the third I will plant this afternoon by the kitchen window. In their place I planted the Java glory vines while the two new Mexican flame vines, which we have had in the past but pests killed them last summer, I planted on a trellis by the front door.

So I have two more subjects of Friday Shots very soon I hope! 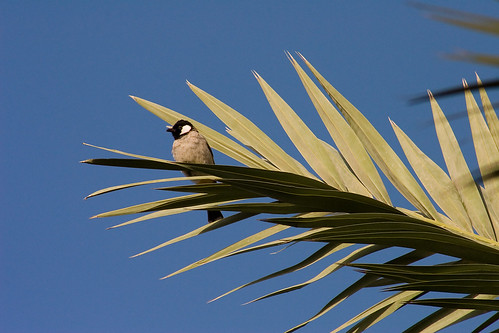 The bulbul is disappearing fast from Bahrain due to not only the disappearance of its natural habitat, the palm groves, but the encroachment of new predators like the crow as well as it being sought as a song bird.

I don’t know how successful they are in their program, I can tell you though that I have noticed a marked increase in these very welcome visitors to our garden in the last year.

This guy posed quite happily for me at the tip of a palm frond in our front garden this morning.

Have a wonderful, happy, peaceful and fulfilling Friday my friends. 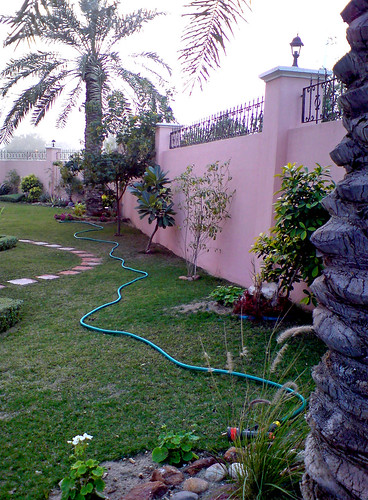 The hose is the outline of the new border which I started to cut and plan this afternoon (5 Feb 07). This is going to be my new project over the next few months and I’m going to document it.

I’ve created a new set on Flickr dedicated to this project, called The New Border Project! Keep tabs on that one if you like to follow my progress over the next few months.

Any suggestions on which plants should go in there?