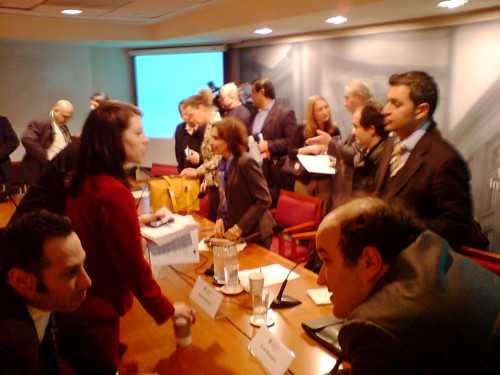 Had an excellent panel discussion at the Woodrow Wilson Centre for International Scholars and met with Dr. Haleh Esfandari (who was imprisoned for 8 months in Iran recently – 4 of which were in house arrest in Tehran) who chaired the session with Dr. Dr. Cheryl Benard of the RAND Corporation. With me on the panel were Najdat Anzour, the Syrian filmmaker; Honey Al-Sayed, presenter of the popular “Good morning Syria” show on Al-Madina FM; Ziad Mosehni of Tolo TV in Afghanistan; Senad Pecanin the founder and editor of Dani Magazine in Bosnia and Riad Kahwaji of the Institute for Near East and Gulf Military Analysis based in the UAE.

It was a lively discussion where every one of us briefly talking about our experiences and then fielded questions from the attendants. I concentrated on the ‘Just Bahraini’ campaign, its history and my future plans for it as well as general discussion of personal and press freedoms in the Middle East.