What is the feature that most draws you to buy the just announced iPhone 6s and iPhone 6s Plus?

To me, as a die-hard Apple-geek, it doesn’t have to be that much, just the new new shiny thing would suffice. However; it’s nice that it has 4k video, 12MP camera, Live Photos (love this feature!), 3D Touch and a plethora of other features which make my mouth water. I want one now.

And before you say it; yes, I know that some of these features are available on Android devices. I still prefer Apple, thank you very much.

Another thing: I won’t wait for it to be brought by our telcos. I don’t trust any of them and don’t want their obtuse contracts. I’ll just go out and buy one outright and be done with it.

And I’ll have the iPhone 6s in Space Grey with 128GB please.

Now where can I book a plane ticket to that someone else is paying for? 😉

My trusty and much loved Mid-2011 MacBook Air’s recent illnesses – a battery that’s just about given up the ghost (expected) and a graphics card that refused to drive my external 27″ Cinema display (unexpected) – forced me to buy another Apple laptop. Reading between the lines of recent Apple products, it became clear to me that with the release of the über sexy MacBook, the MacBook Air’s life expectancy is just about to end. So I bought the most powerful I could get from iMachines, my favourite Apple store on the island. And happy I was indeed when I got it home and started playing with it. Marvelling at how light and fast it was, even compared to the MacBook Air. I was thrilled.

That feeling lasted about a day.

From experience, I tend to back up everything. My most precious possessions are the experiences I’ve had and the photographs I copiously take during them. Most of those experiences are travel or gardening related, so I store those high resolution photographs on external hard disks. And here’s when I experienced the first “gotcha”. The single port USB-C design isn’t practical. How could I connect an external hard disk and a power supply at the same time? Where can I find a USB-3 to a USC-C adapter? How can I connect multiple devices – or at least a couple of USB devices like a card reader and a hard disk to the MacBook at the same time and power them too?

As the MacBook is pretty new, the usual suppliers on the island had only the most basic of its accessories. I bought the much needed USB-A to USB-C adapter from iMachines, but as at the time they only had a VGA version of the multiport adapter, I opted to wait a few days until I got to Bangkok to buy one there. Lo and behold, a couple of days later, I actually found one at Virgin in Bahrain which I grabbed very quickly; though it seems that Apple Dubai jacked up the prices of all Apple accessories (product?) without telling its suppliers, so it was a battle to get Virgin to meet their commitment of the displayed price rather than foist the increase on me. The BD2 increase wasn’t going to get me to lose sleep, but the principle of “being had” would. I stuck to my guns and they finally saw the light and allowed the cashier to punch the printed price and away I went, happily clutching the HDMI equipped multiport adapter.

I was introduced to the world of USB-3 and how fast it is and fell in love with it. Things copied in minutes rather than hours – literally. This encouraged me to buy a USB-3 SD card reader and a USB-3 external pocket drive. And the problem of connecting multiple USB devices into that single port required a resolution, fast!

The obvious thing of course was to get a USB hub. I connected one that I had – I suppose it was a USB-2 or -1, I can’t tell. What I can tell is that immediately I did that, the speed advantage disappeared. As expected! Off I went to the mall in Bangkok and bought a portable USB-3 4-port hub. That worked well with connecting both an external hard disk drive and the SD card reader and the operation was fast enough; however, when I connected another device into the hub like my iPhone or another hard disk drive, the USB hub spluttered and died. Obviously it didn’t have the required oomph to drive all those things. It required some juice. So off I went to the mall again and bought another USB hub, this time powered. That solved the problem.

The real problem; however, remains unresolved. Apple has simply complicated our lives with now having to carry with us basic multiple accessories and their accompanying spaghetti of wires that it refused to provide simple ports for in the computer.

Above is what my current spaghetti junction looks like. I’m planning now to replicate this and leave them in the office so I can have a ready “dock” rather than waste time by re-connecting all the accessories, devices and wires every morning. It’s like 1989 all over again. And let me also mention that this MacBook (currently) cannot drive my 27″ Cinema Display. The USB 3.1 interface is apparently not compatible with Apple’s Thunderbolt interface. So go figure… Very frustrating.

Could the next version of MacBook be better. I really don’t want to carry various bits with me when I’m travelling. The chances of my forgetting a part is very high and that can impact my efficiency and productivity unnecessarily.

Maybe its time to ditch Apple and find another solution? No. I won’t got there. I’m happy with Apple and will stay with them, for now. However, it would be interesting to learn from you of your method of solving this lunacy if you’ve come across it. Maybe better accessories or ways of doing things?

What do you think? Did/Do you face the same problem and resolved it?

Download complete (took about 4 hours on a Batelco 8MB line)

And it’s exciting! I know I know but if I do get another child I’ll call him Steve. So sue me!! 😉

I’ve been trying to download the bloody thing for an hour and it keeps disconnecting with various errors. I guess literally millions are downloading it at the same time, I wonder if the servers have had enough? I’ve had the same problem with 4.1 I remember…

Apple should decentralise these updates to ease the load.

Anyone already has it installed who can give us a “real” review of how it is on the iPad and the other devices?

It’s cool being in Italy not just because it is truly the most beautiful country on Earth, but it’s laws also prohibit the likes of Apple to dictate their terms on and in their country. It is therefore one of the few countries on Earth that you can legally pick up an unlocked iPhone without a contract any time you like…

And that is exactly what I did on the 2nd day of being here. I purchased two, one for my son and the other for me; 2x 32 sweeties! And after almost a week of using it, I can tell you the experience is worth it; twice the speed or even faster compared to the old one, and a host of features which I’m not going to go through at the moment as Apple’s own site as well as many others could furnish that information much better than I could. Suffice it to say that the Compass feature is bloody good especially when trying to navigate the narrow and utterly confusing Roman streets. The camera IS much better and helloooo video, at last! I finally can do video after more than a year with the predecessor. Oh how I missed thou!

To those wavering on the decision to get one, waver no more. Just plunge in and thank me later.

I was starving after the gym this morning so I stopped over at a nearby supermarket to get a sandwich. On the way out, I noticed this on their noticeboard:

This person is selling them for really hefty prices:

They go on to explain why the prices they are charges might appear high with this:

Why does the price APPEAR high? …. What you don’t know is that to own an iPhone 3G in from Apple, Worldwide, you MUST (in addition to initial iPhone price & being a resident in that country):

Well, for those prices, Apple can keep their phone. I would rather have this one instead.

Introducing iPhone 3G. With fast 3G wireless technology, GPS mapping, support for enterprise features like Microsoft Exchange, and the new App Store, iPhone 3G puts even more features at your fingertips. And like the original iPhone, it combines three products in one â€” a revolutionary phone, a widescreen iPod, and a breakthrough Internet device with rich HTML email and a desktop-class web browser. iPhone 3G. It redefines what a mobile phone can do â€” again. 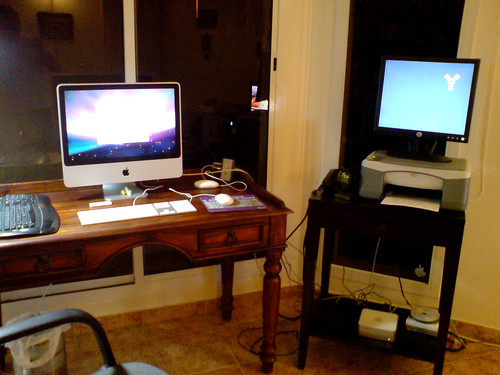 Out with the old…, originally uploaded by malyousif.

After maybe a couple of years with the MacMini, I thought it was about time to retire the old thing and replace it with a fresh 2.66 iMac 20″.

The experience so far is standard (boring?) painless Mac. I plugged the Firewire cable into the old MiniMac, restarted while holding T and it was instantly recognised by the new iMac which is currently transferring all that could be transferred across to the new machine.