These are going on high-growth-mode at the moment, we have two of them astride our gate, in the street planters. They’ve just started to open yesterday and this is what greeted me as I came home from Dubai last night…

This image also is especially presented to the Dubai Press Club people who have worked tirelessly to bring a much needed conference to fruition. Special thanks to Mohammed Al-Mansouri, Ms. Maryam bin Fahad and of course Ms. Mona Al Marri.

Have a wonderful Friday my friends!

If you’re from the Emirates and can’t see this picture, can you please let me know? I actually serve this from my server, but it’s linked to the flickr page so it should at least display.. if it doesn’t I would appreciate you telling me so I can fix it. Thanks 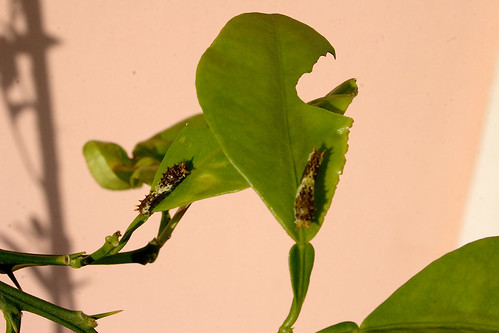 My orange tree was glorious before these pests arrived a few days ago. It even had fantastic fragrant flowers and the start of actual fruit. Alas due to these caterpillars it is now almost a skeleton without a healthy leaf and all flowers and fruit buds dropped off.

Other than picking each of these insects and physically crushing them between thumb and finger (which I have done and relished too) I looked for a solution that might rescue the tree… and I prefer organic solutions rather than chemical.

Trying to fix another problem all together I sought the advice of Elizabeth Shaheen, the noted gardener and author, during the recent Bahrain International Garden Show. Elizabeth suggested Neem Tree Oil to rid my lawn of the chafer grub… As I had just bought a bottle of the stuff, and as it has no side effects, I thought that I can’t lose anything by using it on the orange tree, and while I’m at it I might as well spray the whole lawn and other trees and shrubs.

That was 4 days ago… and until this morning, not a single caterpillar has shown its ugly self on that tree again, and I have not noticed any other bug anywhere in the garden other than ants!

The Neem Tree Oil really works it seems… I am glad. Thank you Elizabeth!

Update 060427: Apparently I’m a bad boy for destroying these caterpillars! According to Elizabeth who met Frances this morning, they do not harm the plant at all and turn into beautiful butterflies! My bad…

I reiterate that Elizabeth advised me to use the neem tree oil specifically for the Chafer Grub problem I have with the lawn, rather than nuke everything in sight!

Put that one down to “learning experience.”

Sorry Liz, and thanks once again! 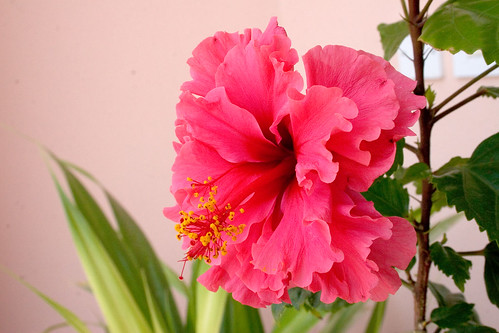 I’ve just bought two of these plants a few days ago (cuttings) and replanted them in big pots placed at the front door of our house. I’m glad to see that they not only survived, but already flowered brilliantly!

Have a wonderful Good Friday and Happy Easter everyone.

I stopped over this afternoon at the new Jassim’s garden centre, opposite Bahrain Motors on the Budaiya highway and man, was it worth it! It absolutely floors the competition; they’ve got everything under one very modern roof. Well stocked, plenty of medicines if you need them, good selection and reasonably priced garden tools and pots, and walk to the back and out into their garden and select from a good selection of summer plants (but some were looking quite manky and needed attention).

I think it’s just a soft launch, but if you’re into gardening, it’s worth stopping by and having a good look around. It is the cleanest, most modern and welcoming garden centre there is on the island. 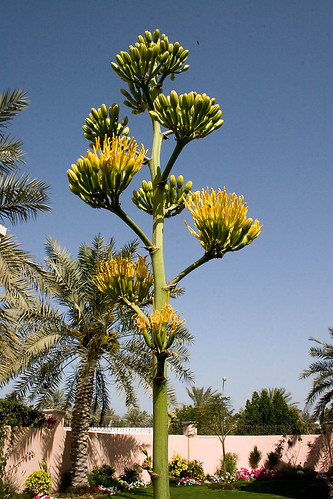 The Agave has flowered! It started last week and it already has 4 clusters flowering.

Have an excellent Friday my friends!

I was bored stiff yesterday, and as I fired the gardener last week (the guy pissed me off, was getting too lazy, too familiar and trying to take advantage of my cool attitude with him, anyway) I decided to stop by a new glory hole on the way home and pick up something that would pick me up, and what better thing to get then another power toy?

So I stopped off at Al-Mahroos (past the Salmania round-about, just after the Alam Flora place, turn in into the alleyway and you will be surprised at the buildings: huge modern sales offices, garden tools shop and workshop) and went a-lookin… a few minutes later I walked out with this beauty!

So I went home, plugged it in and started hacking at the hedges!

I’m not kidding. I honestly thought that the bloody thing would work like a hot knife through butter and was surprised when it didn’t actually work like that. Damn thing sounds great but doesn’t cut when one adopts the “fire-hosing” approach, so that stupid twit Edward for sure was faking it.

After being walloped round the head by Frances (while the chain-saw was off of course, she’s careful that woman) and told to do it slowly and surely (!) and not in a hurry (!!) the last hedge actually was cut in a much better fashion once this new advice was registered in my brain.

But oh you should see the other 4 hedges, the first two were cut manually and they look like they were in a stampede of elephants (that’s what prompted the chain-saw buying idea) and the other two were even worse than the first pair!

I’ll get the hang of it one day I guess… but damn, it does sound beautiful! 🙂

It was the first really “hot” day of the year yesterday, and today is not fairing much better. It was around 35C at 4pm yesterday, about the same today I think. I had an idea to see just how it is if Arif cracked an egg on the path! You’ll have to watch the movie to see if it did really cook, and for a quick tour of the garden once again 🙂

I was watching my very first vlog again and was surprised at the amount of change that happened to the garden over the last 6 months. I am not done with it yet, not by a long shot, but just seeing the changes that happened to it since I had the initial landscapers is amazing.

Of course, I went ahead and changed everything that they have done; pisses me off thinking of the amount of money I paid them for doing something that I ultimately changed, but I guess this is part of the learning experience… and their ground and irrigation prep work. Not all is lost.

This is the first glimpse that you get of my house, without any coy hiding of corners and parts! So enjoy, and go easy on me please. If you have any ideas regarding the garden I would love to hear them. I would particularly welcome your input in what shrubs I could use to make my “bulbs patch” look more permanent.

I am also looking for addresses and recommendations of big garden centres in the Eastern Province of Saudi Arabia, so if you know any and would recommend them, let me know please with good contact and address details. This is the excuse that Frances was waiting for for 19 years; a trip for her to Saudi without any objections from me! I have refused to take her across before because I just couldn’t be bothered, and the real reason of course is that if she saw how good the shopping is there, she would drag me there every weekend!

This obviously is my first attempt at VideoBlogging, Vblogging, Vlogging or even Vogging, don’t really know what exactly to call the experience as people are using any of these terms quite happily. To me it sounds better for “vlog” – which is all beside the point. I know.

So welcome to my house! I couldn’t find anything better to do this morning as I decided NOT to go to work and just chill out and harass the gardeners. What’s new? I know that too, so save your breath.

I couldn’t find my Sony DV camera anywhere in the house, but I said as the intention is to post a small version of a movie anyway, why not use simpler tools? That I did:

The Canon IXUS 400 fit the bill quite nicely, I just installed a 1GB compact flash card in it, pointed the camera at me and started recording.

The editing was done with the included iMovie HD on my miniMac at home, and used the same program to export the final result into an .mp4 file as you can (hopefully) see above. You’re saved all the stupid filters and wipes as I thought they were just unnecessary in this particular piece, cuts only is what worked. I would have liked to use titles but I couldn’t be bothered to find out how it worked.

I’m treating this process as “proof of concept” but hope that you like it. If so, let me know and maybe I can start vlogging once in a while to alleviate the boredom. I hope it will become more than a feature… sort of finally justifying the .tv domain!