After his success in securing the 2005 Thunder Arabia Formula Ford Championship Title, young Raed Raffii, the 16 Years Bahraini Champion is now on his way to the International World of Motorsport.

Raed tested on Saturday and Sunday in the Formula BMW Race car with Meritus Team, and was witnessed by Formula 1 World Champion Nigel Mansel, and GP2 Driver Bruce, where he proved to be a real talent.

Raed in his first test in the Formula BMW car managed to go around the same track used for the FBMW world finals, in just under 2 seconds from the time of the World final Winner.

â€œFor a young driver to overcome the fear of a new car, and be able to master it after only 20 laps, and manage to achieve a time of 1:29.168, only 2 seconds behind the Formula BMW world final winner, is a remarkable achievement, and I am sure given more time to practice on the car, Raed will manage to get the BMW World Final Winner Best Lap Timeâ€ Said Bruce the French GP2 Driver who coached Raed during the Test.

â€œIt is nice to see a young Bahraini testing at the same time and on the same cars as my own sons, this is the way to start building champions at the young ageâ€ Said Nigel Mansel Formula 1 World Champion.

â€œRaed will be the first Bahraini Driver to start competing in Europe at the age of 16, as we believe Europe is the right place to go, in order for the driver to reach the level required to be an International Driver, and we all believe that Raed has the talent and the ability of raising the Kingdomâ€™s flag on the International Level, as he will be competing in the Formula Renault in Belgium and the UK throughout the season of 2006â€ said Sherif Al Mahdy, Thunder Arabia Marketing Director.

â€œWe would like to thank Bahrain International Circuit management for allowing Raed to have his first test on the circuit, by organising the Formula BMW World Final, which showed our young drivers the competitiveness of the young drivers in Europe, so they can be prepared to what they will go against, once they cross the regional borderâ€ Said Mohammed Hussein, Thunder Arabia Communication Director.

As for Raed, he was really happy and commented saying: â€œI could not believe that I am testing on the same cars as the formula 1 world champion sons, and at first it took me sometime to get used to the car, but after some time I got the hang of it, and was able to go fast, but the track conditions did not allow me to go as fast as I could.

I really thank Thunder Arabia for giving this chance and their trust , I also would like to thank my teammates in Bahrain Young Guns Team, my family and all my friends for their support and I promises everyone that I will do whatever I could to raise my countryâ€™s flag anywhere I goâ€

Hassan Al Wardany confirmed that â€œsuch a step with Raed will pave the way for many other young drivers from all over the Middle East to follow his steps, and I am not revealing a secret when I say that we are preparing for similar plans for other young talents from Bahrain , Jordan , Egypt and KSA in our search for the first Arab Formula 1 Driverâ€

Bahrain swung into pole position today following an announcement that the Bahrain International Circuit (BIC) would officially kick off the 2006 FIA Formula One World Championship season.

The dramatic announcement was made by the FIA World Council when the eagerly anticipated racing calendar was announced at its meeting in Rome, Italy today.

It will be the first time that Bahrain kicks off an international series of such global significance â€“ and the announcement, which comes only two years after Bahrain became the first Arab country to ever host a Formula One event, marks an impressive achievement for the Kingdom and the Sakhir circuit.

â€œWe are all very, very proud of this announcement and the confidence that Formula One has in the people of Bahrain to stage the first race,â€ said BIC General Manager, Martin Whitaker. â€œThe first race of the year always attracts considerable media attention and next year will be no exception with added interest in new teams, drivers, sponsors, engines and regulations. The eyes of the World will be upon us on March 12th,â€ he said.

The 2006 Formula One calendar announced yesterday includes 19 races. Malaysia is next on schedule as it hosts the second race on March 19 followed by Australia on April 2.

The Kingdom of Bahrain has a long term agreement with Formula One to stage the only Grand Prix in the Middle East region. The announcement in Rome signifies further good news for the Bahrain International Circuit that is fast becoming one of the Worldâ€™s premier venues for motorsport and corporate entertainment.

Last month the circuit announced the signing of a five year deal to host the Vee Eight Supercar Championship from Australia and in just over two weeks holds a long awaited FIA International Drag Racing Exhibition event on the popular Sakhir strip.

â€œThis is certainly a huge step forward not only for us at the BIC but also for the Kingdom of Bahrain and the regionâ€™s motorsport industry at large,â€ said Whitaker. â€œThis is an unprecedented opportunity for us to showcase our organisational and technical abilities on the Worldâ€™s most prestigious motorsport stage. The Kingdom of Bahrain is now an established member of the Worldâ€™s most exclusive club and the season opener is an opportunity for the country to showcase its ability to a global audience as well as blue chip investors from all over the world,â€ he said.

The announcement comes directly on the back of a year in which Formula One has bounced straight back to the top of the sporting ratings. An intensely close fought season witnessed the crowning of the youngest World Champion ever in the form of Spaniard Fernando Alonso while Renault wrestled the Constructorsâ€™ Championship title away from McLaren at the very last race in China. The season also saw the end of Ferrariâ€™s dominance and the potential of a new season with fresh driver line-ups, new engines and new regulations is a mouth watering one that fans will be anticipating the world over. The start of the new Formula One racing season in Bahrain promises to be exceptionally dramatic.

â€œThe first race of the season is traditionally one of the most exciting,â€ said Whitaker. â€œIt is eagerly anticipated around the world and it is great to think that we will have hundreds of millions of TV viewers glued to their television screens watching the race as it unfurls here in Bahrain,â€ he said. â€œLast yearâ€™s Gulf Air Bahrain Grand Prix proved an outstanding success with almost every available seat sold out. We are confident that the buzz that is already growing for the forthcoming race will make this the most successful to date, give us the opportunity to display the friendliness and hospitality of the Bahraini people while also making the Kingdom proud,â€ he said.

This is the first driving activity I participate in at the Porsche Club of Bahrain and it was very enjoyable. Arif was my navigator and I only managed to get lost once, but that wasn’t the issue. The real issue was that it was a timed event which we really didn’t understand, but as it is a Porsche, it was pedal to the metal all the way, only to arrive considerably early that penalised the bejeezus out of us!

Still, was a good day out driving through the back roads of Zallaq village, up-and-down strips of asphalt in the desert, and trying to solve clues and shoot a video while doing all of these things… 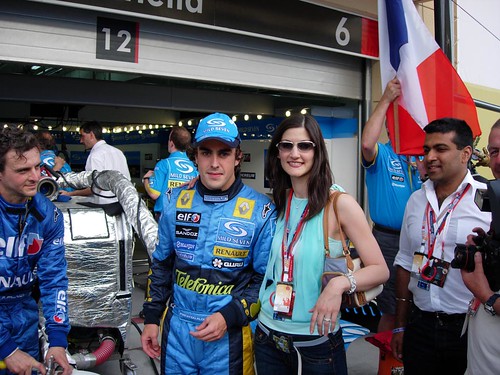 was printed on a Renault’s mechanic’s T-shirt celebrating the youngest ever Formula One champion: Fernando Alonso at 24 years and 58 days. Well done Fernando, and well done indeed Renault, you wiped the floor with everyone else: Ferrari, McLaren Mercedes, etc, etc.

Fernando drove a fantastic race tonight and a very aggressive qualifying session before that to show everyone that he wants to win from the front-line, rather than just cautiously.

I love both his, and Briatori’s reaction when he crossed the line….

But you would be a fool to discount Michael Schumacher though, especially with the yet again new qualifying format for next year, he most probably will come back with bared teeth and a huge appetite to take back what is rightfully his!

The real winners however, as I have discovered earlier tonight, are Suzy (in the picture with Fernando) and Manhal. Congrats… a BIG congrats to you both! Me very very happy for you 🙂

This was done at the Holiday Inn car park in Feb 1999 and it was brilliant! Everybody seem to have enjoyed themselves and this race has now become a staple event in Bahrain’s motorsports.

What a day! This was the pre-cursor to the F1 proper, and have the first ever F1 car driving at hellish speeds on a public road was brilliant. Here is the movie I have created, with the help of Arif who actually shot quite a lot of video that afternoon.

The Pit-Lane
Originally uploaded by malyousif.

Do you need more proof that we were IN the pit-lane just before the main GT Festival race in Bahrain? EAT YOUR HEART OUT!! 🙂

Once again thanks to Amira Al-Hussaini, Shaikh Nasser Al-Khalifa and Tony Hart of Batelco!

more pictures in the gallery

That is, women who cover their faces completely with semi-transparent cloth. Some I’m sure will say that the cloth does not restrict vision and it’s like sun-glasses. Yeah sure! This is the result of our infant Parliament. This is their major achievement in their last session. I’m sure that next they will find other very worthy cause to take up. And we all know that we do NOT have any other immediate problems to resolve like unemployment, a high increase in crime, continuing road congestion, etc. Allowing veiled women to drive is of the highest national priority. Apart from that, now if you are unfortunate enough to get involved in an accident with a veiled woman driver, you have to wait for one of the seven traffic police-women to come to the sight of the accident to resolve the matter, NOT a normal traffic (male) cop. Here are some recent links so you can form your own opinions:
– Anger over accident blackspot
– BD 200 million to be spent to slash road deaths
– Indian killed in traffic accident

Is it even possible?

Ferrari were left amazed by Michael Schumacher’s powers of recovery as even a combination of rain, fire and oil on the A1-Ring track failed to prevent him from winning the Austrian Grand Prix on Sunday. Schumacher scored his third successive victory of the season and the 67th of his career at the track where his most controversial win was achieved last year thanks to Ferrari’s decision to use team orders.

I can’t wait for next year for Forumula 1 to come to Bahrain!