Perseverance in the face of adversity is nothing new to this true Bahraini champion, as with grabbing wins from the jaws of an extremely competitive field.

Hamad talks about his experiences and where he would like to ultimately hear the Kingdom’s national anthem due to his success.

What an unforgettable race. Hamilton hammed it, good, riding roughshod over the Iceman at the pitlane exit ignoring that flashing red light, which normally means STOP! Well, he took out the competition for sure and opened up the championship a bit wider. Kubica now leads, giving Mario Theissen a huge smile he hasn’t had for quite some time. What’s more, he led Heidfeld for a well deserved one-two.

What put the cherry on top for me was seeing the gentleman of the sport make it up to third, hopefully breaking his recent run of bad luck. He was quite reminiscent of years of yore and contemplative too. I hope this doesn’t mean that he’s hanging up his hat just yet. But if he does, then finishing off the career on the high note of 62 podiums ain’t bad at all.

Well done all, and commiserations to Raikkonen. Hopefully Hamilton Sr. will slap Jr. upside the head to get him to sharpen his vision somewhat for future races.

Maxy, oh Maxy, what did you do you bad bad boy? Now people won’t leave you alone and are asking for you to be whipped, but proper!

Serves you right for fining our boys $100 million last year! 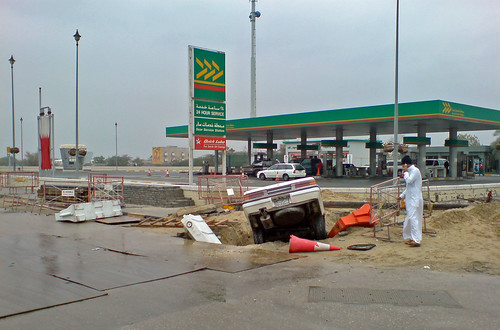 I couldn’t believe this scene when I saw it while driving to the office yesterday morning!

I circled back, stopped and had a chat with the guy (after taking the picture) who transpired to be the owner of the car and the perpetrator of the incident.

He said that he was trying to avoid an oncoming car, hit the brake and ended up in the ditch!

Looking at his tyres, it is no wonder that he did. He was on slicks with completely worn treads and it was raining – which in other words as this is in Bahrain, the road surface becomes a skating ring but with mud instead of ice.

Kuwait (I know it’s featured in this website heavily over the last few days, but we love ’em!) is invading Bahrain. No, not to help Wagdy pack, but to bring some gorgeous cars and people for a fun weekend at the BIC this Thursday. The track will be open to whoever wants to enjoy the show and looking at some of their events and the line-up this weekend specifically at the track, it will be well worth the visit.

Above all of that, the real fun thing will be your ability to meet and greet some famous Kuwaiti bloggers! I know that Mark of 248am, Marzouq from ZDistrict and our old friend Bader from Saviour Machine as well as others.

Have fun guys and welcome to Bahrain once again! 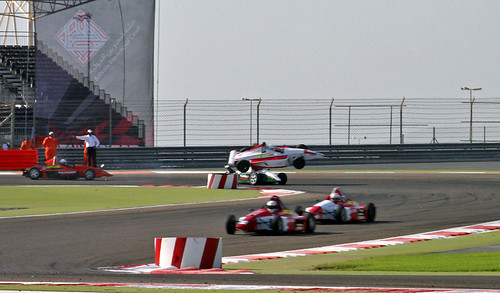 And you thought that cars are supposed to just be on the ground? Well this guy’s got another idea and he tried flying right through Turn One, carried on for a bit on the mile long runoff area and then just got out and walked away!

I’m glad that he didn’t suffer an injury, neither, it seemed, did anyone else, even the 2 or 3 cars he almost destroyed. One of them carried on through the race without a nose cone. 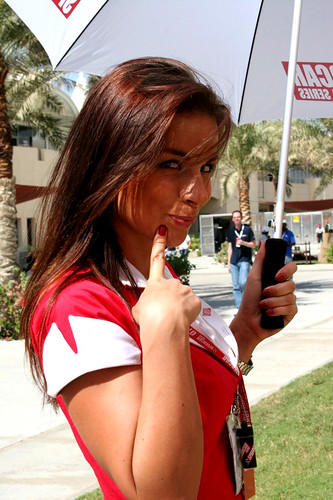 I’ve got hundreds of pitbabe pictures from the Desert 400 weekend like the one above, and hundreds more of cars like the one below, which would you like me to process and upload first?

Of course I will limit my upload to the best 20 or so, I wouldn’t want to bore you to death with this stuff, after all, you need to go to the BIC and experience the atmosphere there yourselves! 😉 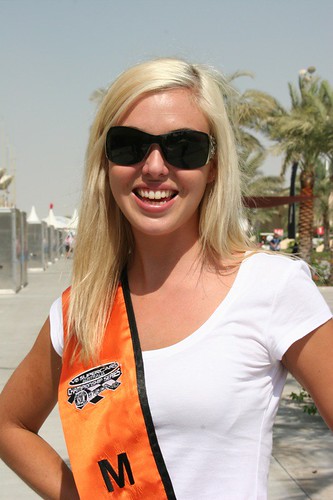 It’s a beautiful day, you all should be out enjoying it, and what better way to do so but be at the track enjoying the symphony of engine music?

To put you in the mood, I’ve done an interview with Martin Whitaker, the CEO of the Bahrain International Circuit about various things, the circuit, the community, his experience, future plans, and whether the Abu Dhabi circuit made an offer for him yet! Listen to the following Podcast to find out!

The original upload was playing rather weirdly but after investigating the plugin I use a little, I found that the problem is with Flash which can’t play 48k files, it is limited to multiples of 11.025 hence we both sound like we are talking while under-water! Please download the file and play it on your computer rather than listening to it online. Next time I’ll change my mic’s setting to 44.1 so that I don’t fall into this stupid trap again. (We sell these mics by the way!)

Have a wonderful Friday my friends…

Man it is fantastic here!

I’ve spend the whole morning walking around, in and out of the pits, talking to people, taking hundreds of pictures, enjoying the noise of the cars and interviewing Martin Whitaker for a podcast that I hope to be able to release as soon as possible.

I’m just going to upload a few pictures to whet your appetites and hope that you will do yourselves a favour and coming over to enjoy a full weekend of not only racing and partake of the many other activities lined up. It is really worth the effort. I know that I’ll be here tomorrow and the day after to do so.

Keep clicking on the collection above as I shall be updating he Flickr set often.

Eyad and I are proposing another gathering on Sunday 21st October at Motorox to watch and enjoy the gripping F1 finalÃ©. The race starts at 9pm 7pm Bahrain time and lasts for 90 minutes normally. Please be there by 8 6.30 or so if you can because if you come and and block the screen while you are trying to squeeze in, there is no telling who (not if) will kill you!

As I am sure that it will be rather busy, we need to reserve immediately. Please let us know if you would like to attend so we can tally the numbers.