I am sure our lawn was MUCH better than it is at the moment and I am almost 100% sure that the damage done to it is almost exclusively to this bastard that try as I might, I just could not get rid off: 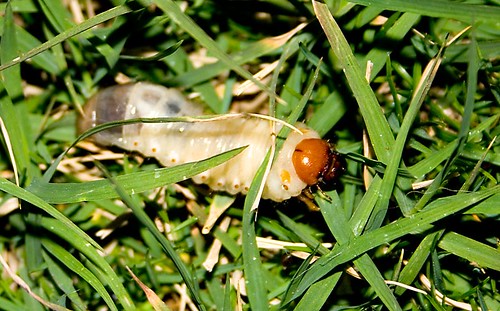 What these bastards transform into is a beetle that digs deep into the ground to lay its eggs, which develop into these grubs who eat the roots of lawn grass – specifically – which obviously results in burnt-out dead patches of grass. When they get hold of an area, you could literally just get hold of a patch of grass as if you are pulling someone’s hair (not that I encourage anyone to do that of course) and pull up and the whole patch just comes up cleanly in your hand. What is left behind is a patch of soil with holes where these grubs have dug tunnels through.

The damage does not stop there unfortunately, the birds and other animals love to eat them too. The bulbuls and mynahs adore them and go around the lawn with digging and ripping the grass to get to them. You should see their shenanigans in the afternoon/early evening when they descend into the garden and fight to get these morsels. Our dogs – Phoebe particularly – loves to eat them and has been known to rip up huge holes to get to them.

I’ve read about the problem of course and identified the bug through one of Elizabeth Shaheen‘s books (excellent reference of which plants actually grow here so her two books are a must-have for Bahrain gardeners). Digging through the Internet, a possible solution was identified in the form of beneficial insects, nematodes specifically, an ideal solution – especially as it is environmentally friendly and does not harm humans, birds or animals. Reading more about the solution I became convinced that it would be ideal for my lawn and rid me of these pests. I didn’t want to repeat another horrendous experiment with a chemical which was suggested by an agricultural engineer by spreading pellets of Carbofuran on the lawn. The problem is; though, when I did do that I was picking up dead birds from the garden for the next month! Gruesome and sad.

When I researched it more afterwards, this is what found Wikipedia to say about it:

It has one of the highest acute toxicities to humans of any insecticide widely used on field crops (more toxic are only aldicarb and parathion). A quarter teaspoon ( 1 mL) can be fatal. Most carbofuran is applied by commercial applicators using closed systems with engineered controls, so that there is no exposure to the chemical through pouring or measuring. Toxic effects are due to its activity as a cholinesterase inhibitor (it is thus considered a neurotoxic pesticide).

Carbofuran is also known to be highly toxic to birds. In its granular form, a single grain will kill a bird. Birds often eat numerous grains of the pesticide, mistaking them for seeds, and then die shortly thereafter. Before it was banned by USEPA in 1991 ([1]), granular carbofuran was blamed for millions of bird deaths per year. The liquid version of the pesticide is less hazardous to birds since they are not as likely to ingest it directly, but it is still very hazardous.

I was determined to find a good nature and wildlife friendly alternative.

Unfortunately as the company that sells this alternative are based in the UK, they have a policy of not exporting these insects. But I wanted them. I wanted them now. What to do?

I went to the agricultural department at the end of the Budaiya highway and talked to the engineers there who were adamant that the nematodes are no good and just carry on spreading Carbofuran in a methodical fashion – “but put up a couple of scarecrows to deal with the birds for a few weeks!”

If you want something bad enough, you will find a way to get it. Right? Right. So I got a small quantity shipped, together with some live ladybugs to deal with another problem my hibiscus was suffering from (mealy bugs), unfortunately for me, when they did arrive they got confiscated at Bahrain Airport and will not release them to me without the express authority by the Ministry of Agriculture! Damn. Okay, time to go and explain to them all the circumstances in the hope that they will see my point of view.

Although Dr. Abdulaziz Mohammed (probably the only Entomologist in Bahrain and head of the concerned department) was very polite, listened to the problem, read the printouts I took with me and the research that I have done, he has adamantly refused to let me have my insects! The reason? His department does not have any resources to carry out contained experiments on these pest-control methods before releasing them. His department does not have the money, staff, labs or outside test facilities. He even confided in me that he sometimes sends out new insects to the States for analysis and identification using his own personal funds to do so!

Still, he understood completely my problem and the motive for me to bringing the nematodes in, but he put them in his freezer and killed them all off. I kinda agree with him. We don’t know what side effects they might perpetrate.

My lawn is still suffering and will continue to do so until winter comes, but by that time its glory would have waned and it would be in its dormancy stage.

I really don’t know what to do with it now. It’s really not too bad actually. People still go ooh and aah when they visit my garden, but they don’t know it as I do of course. It was – and still could be – an awful lot better.

Failing removing the whole lot out – and I mean the whole bloody garden – and start all over again under no guarantees whatsoever that these bugs would be caught and eradicated, I would love to hear your solutions if you have any.

One of my solutions is to dramatically increase the flower-beds – resulting in less lawn areas of course, which is a shame – or how about spreading more seed to mix the grass? My lawn currently is South African grass (two seasons, stays green throughout the year), how about adding another soft grass seeds in there to create a thicker carpet? Would that work? Did any of you try this?

Or should I just carry on eating more of the lawn area and expanding the beds?