I was out for practically the whole day in the garden! I accomplished a lot considering I wasn’t working toward a deadline; it was see this, think about it, do it! Brilliant.

For (my) record, let me list what I have done:

To my surprise, one of my Cassia fistulas broke its tie to the cane (it’s a young plant of less than 2 years) and just collapsed on the ground! Needless to say the warning bells were ringing rather loudly. On investigation I found that the ground around it was not compact at all, it was very spongy and the roots were not penetrating deep into the ground, considering the age of the tree. It could be because of the zillions of ants I have around the garden (suggestions to eradicate them welcome) or even more probably it is because with the ready availability of water, it just didn’t bother rooting at all! That also explains the slow growth I have had with this one and its neighbour.

It’s strange that even after 3 years living in this house and being in the garden countless times, things just don’t hit you as awkward. I guess this is how experience is gained. I looked at the water sources around the tree and I found about 6 sprinklers in an area of about 8 – 10 square meters! One was directly behind the tree, another in front and yet another about a couple of feet to the side! So it was getting far too much water… It wasn’t a good idea to plant them in the middle of the lawn!

I decided the best thing to do is disconnect three sprinklers and move just one to be positioned in between the two Cassias; that would give them enough water to flourish and would water the lawn sufficiently enough – I hope.

So I created a wave: 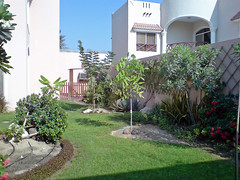 I removed the grass from around the Cassias and extended the Southern Border to include them. The border now has two “humps”, the dimensions of these humps are irregular (I’m not a fan of symmetry) but the apex is about 1.5 meters. I’ll take an overhead picture and include here tomorrow to see what I mean. That grass removal off a combined area of about 4 square meters or so was backbreaking. I did all of that last night and had a really good sleep because of it ;). Anyway, this morning I put the perimeter plastic divider so that the grass does not impinge on the new extension, and did the plumbing. As I still have some sand outside, I moved 5 wheel-barrow-fulls of sand to create two gentle mounds around the two trees and positioned some rocks around their base and planted some pennisetum grass around the larger tree. I like the final effect. It should look quite nice in a little while.

2. That major job completed, I turned my attention to the adjacent red Frangipani. It never really grew very well in that area – again because of being over-watered I think – and it was getting to be out of place; with a huge white Plumiera in the immediate vicinity and neighboured by three Cassias, it was time for it to go. It has two healthy young branches which I cut and potted and placed around the pool (that area is destined to have several tens of large pots, but that’s another project which I shall come back to later) and uprooted the trunk, filled the hole and filled with lawn grass which I got removed from another bed I was designing. I know, it’s all go!

3. I propagated about 9 or 10 pots of pennisetum grass in the nursery, and it was time to plant those. I took a couple over to my friend Rami who is also in the mood to redesign his garden and planted the remainder around my garden: three around the larger Cassia fistula and three or four (I can’t remember now) in the new Buddha Patch.

4. As I was potting the red Plumiera, Roy – my part time gardener – came in. I set him off to creating a new “English Border” bed by the living room opposite the Northern Border. The resulting area will have perennials mainly but with enough space for annuals to be thoroughly enjoyed when looking at that border from the living room and around the bend in the garden. It will be a nice surprise for our guests when it is completed. The new border is around 9 or 10 meters long and 2.5 meters deep at its widest. Roy completed the removal of the grass and made a start at the drip line. I’ve got to properly position it tomorrow and put in the actual drip heads in there.

5. As Roy was doing that, I was busy with one of my power tools! I got the strimmer out and strimmed all edges and sides from that unkempt grass. I hate gardens with tufts of grass at the walls and in places that the mower can’t reach. I make it a point to get my gardener to drop everything and just attend to those. Unfortunately as we were both busy re-designing the garden and ripping new areas for beds and patches, we didn’t have a chance to address those tufts which – to me at least – look as unsightly as nose- or ear-hair! Ugghh!

I strimmed away for about 2 hours, but the end result will only be available tomorrow in daylight, as I finished when the sun had well and truly set by the time I downed tools and played driver to my kids.

6. I passed by Rami’s on the way back from Manama after I dropped the kids and collected two gorgeous Cycases. I’ll plant one in the Buddha Patch and the other in the English Border. I’ve just test placed them there just now and I shall see how they look in the morning. (Had I not been so knackered, I would have brought out the trowel and having at it!)

7. Earlier this morning, Rami and I visited a friend’s house and reveled in her absolutely gorgeous garden. It is very tastefully done according to her wishes and it looks very nice indeed. One feature that I really liked is her use of two different kinds of grasses on her lawn; a circle done in South African lawn grass (the same that I have in my garden) and hills around it covered with Japanese grass carpet. The effect is very nice seen live, I’ve seen the same method used in pictures I have seen of landscape design, but seeing it live certainly brough it home. Needless to say, I liked it so much that I am going to implement it in my garden soon. I’ve already earmarked the area and discussed it with Roy this afternoon! Thanks Reema!

As I said, a wonderful day – and I never thought I would have described a day in a garden doing manual work with such adjectives. Gardening must be growing on me, or it’s a recognition that I am getting old! In either case I don’t particularly care. I enjoyed myself tremendously and have no qualms whatsoever in repeating the experience once again the whole day tomorrow!